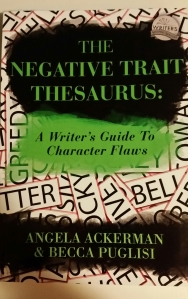 Why I picked it up: To be honest, I had come across this and the others in this series on Amazon, and had my eye on it for a while. After engaging/lurking in several conversations about these books, I decided I definitely wanted to give them a try. I received The Negative Trait Thesaurus as a Mother’s Day gift this year.

What I like: The introductory parts! Before you even get to the “thesaurus” part of the book, there are excellent sections about why flaws and negative traits are so important for well-rounded characters and captivating stories. While I have several buns-in-the-oven idea-wise, I am still very fledgling when it comes to writing, and these are excellent for understanding how flaws and emotional wounds can really drive a character and their actions.

In the thesaurus part of the book, not only is the definition of that negative flaw given, there are also similar flaws, possible causes, behaviors or attitudes that can result from chosen flaw, associated thoughts, positive and negative aspects of the flaw, and much more!

What I don’t like: At this point in time, I have no quarries with this source. If that changes, I’ll update it here.

Keep in mind: This is not an exhaustive thesaurus of all negative emotional traits, but it covers a lot of ground.

I’m definitely due some more usage of The Negative Trait Thesaurus, which I’m very excited for. I think one of the most difficult things for me in character creation is flaws, because characters for me are people, and I always want them to be their very best. Obviously this would make for boring stories, so I’m looking forward to giving my characters some emotional wounds and really bringing some more depth to them. From reading the first part of the book and looking at the actual thesaurus part, I’m quite confident it will be quite helpful.

Have an opinion to add about this resource? Leave it in the comments.

One thought on “Resource! – The Negative Trait Thesaurus by Angela Ackerman & Becca Puglisi”