Okay, time for seeds, round two! This time, at 8 weeks before frost date, I have planted another set of seeds from last time (link here) plus the following:

I uh…might have mixed up the labels, so I won’t know if I did or not until they grow enough to tell what they are. And a cabbage seed fell into one of the broccoli cells, so I guess I’ll see what happens there. Other than the super-uber-tiny seeds like Oregano, I tried to only put one seed per cell so I didn’t have to choose between too many plants. Now it’s time to continue the waiting game.

I’ve also been comparing my seed packet info to that on the Texas A&M University AgriLife Extension page of Recommended Cultivars (link). So far, most of it matches up, but I have a couple of things TAMU says can go out a bit earlier. I figure if that’s hitting my state rather than trying to cover whoever might have bought the seeds, I’ll go with that info. This site also has pdfs for the home gardener for information on varieties, how to grow, problems you might encounter, and harvesting information.

I’ve been planning out what is going to go where in my garden. I enjoy this a lot. I like writing/drawing it all out and seeing what I might need when and predicting any problems that might come up with space. For example, I have a 3′ diameter grow bag that I will be using for my greens. However, based on the maturity times and when I need to plant other things, it could potentially go unused over the summer. I’m working out what I might can put there, but it’s nice to know exactly what spaces I have and if issues like that might arise.

I have a Google Doc that I’ve been using to plan, and I plan to use it to keep a journal of sorts of my garden this year. I’ve thought about sharing it, so you can see what all I’ve been up to and what I plan to do and when and whatnot. Is that something you’re interested in? Of course, I plan on being much more on with updating this info in the blog, so I don’t know there’s much that won’t be shared here.

I’m super excited about this year, and I hope it turns out to be a good one. One of the things I need to learn is how to use my vegetables once I’ve harvested them. Herbs are something I have zero idea about (who knew they didn’t grow already packed in jars ;-P). Eventually I hope to be able to grow enough food to reliably supplement our groceries and also to preserve some for later use.

Is there something about my gardening journey you’d like to know about? If so, let me know! Or, share a link to your own!

I have been seeing the Caraval cover on Twitter forever, and seeing people rave about the book as well. It always sounded interesting, but I hadn’t ever picked it up. As luck would have it, my mother-in-law brought it home on winter break and let me borrow it when she was finished with it. I’m so glad she did! Other than thinking it sounded good, the author is part of the line up for North Texas Teen Book Festival, and to be quite honest I’ve hardly read any of the 76(?) authors that are going to be there, so I thought I should read a few, although my experience is that even if you haven’t read their books, you can still appreciate what is being said in the panels. END_OF_DOCUMENT_TOKEN_TO_BE_REPLACED

Woo! It’s seed starting time! 10 weeks before frost date is the earliest seeding time on my seeds, and I have several that have that time frame. I’m closer to starting at 9 weeks before.

I ordered these seed starting trays and this grow light (Amazon got me with a lightning deal…). I bought some Jiffy starter mix (Walmart, $5) and here we go! By the way, my links aren’t affiliate, I just thought I’d share exactly what I was using.

Well, to start off, I set up the grow light in my intended place and realized it was a whole heck of a lot brighter than I thought it would be, and I became concerned about the safety of it being in the kitchen and having a six-year-old running around. Even though he listens well, I am cautious about taking the chance. So I thought, what if I can enclose it? And I took to Twitter with my concerns as well. I’ve come across the idea of containing the space with reflective insulation or mylar sheeting (basically like a grow tent), creating a cardboard barrier, or–very possibly–trying a mini greenhouse outside instead. When I brought my problem and possible solutions to my husband, and plugged the light in for him to see, he thinks it’s fine. So I’m going to stick with it and try it. For now I have some cardboard nearby containing some of the light (and hopefully heat).

These are the ones that have “start indoors 8 to 10 weeks before last frost date”:

Since the seed starting trays are in counts of 12, I planted 3 of each of these 8 plants.

Step-by-step, here’s what I did: filled seed trays with seed starting mix, sprayed it with water until damp, made a hole for the seeds, dropped the seeds in, and pushed soil on top of them. Then I placed the dome on top and stuck them on the shelf. Now to watch for germination! 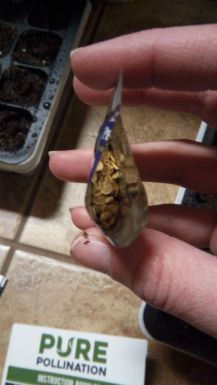 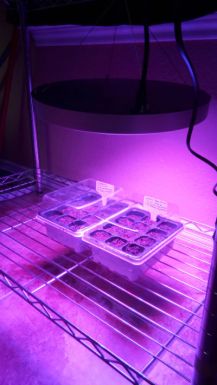 I’ve drawn out some potential layouts for my plants, but I still can’t decide if I want to continue using the buckets, making it easier to provide support to the plants, or if I want to invest in some fabric planters to try and maximize the interplanting potential. The fabric planters I’m considering are on my “list of possibilities.” And then, the excitable part of me thought:

So, if I can find a way to swing it within my budget, maybe I’ll try both the buckets and the fabric containers. And if not this year, maybe next.

I’ve remembered to join #GardenChat this year, which has been a lot of fun. Several said they’ve grown both tomatoes and corn in the same garden and seen no issues with pollination. I had read that they couldn’t be grown in proximity to each other, which was a bummer, but these chats gave me hope, and maybe I’ll find a way to plant corn this year, too.

Earlier this year, we had a problem with rats in our attic. *shudder* Part of our solution was to trim back the trees that were close to the roof. (Thankfully, trapping the ones that were inside and cutting back the trees seems to have solved our problem for now.) Now, because it’s been freezing the past two months when our lawn pickup with the city runs, we have a bunch of tree branches at the side of our house. So I’ve had the idea to pick out a few and see if I can construct trellises or trellis-holders from these branches. I’ll keep you updated on that one.

Have you grown plants from seed? How and where did you start them? Did you over-think it like I’m doing? What methods work for you?

Thanks for stopping by,

I was on one of the campuses I often substitute teach on, and I had a class in the library when I looked over and the librarian had a nice stack of just-out-of-the-box books. In beautiful purple and gold, there was The Speaker, Book Two of Sea of Ink and Gold. I could have died. When I told her I had read and loved The Reader and couldn’t wait to read The Speaker, she let me borrow it! I  am so very grateful to her! I read The Reader almost exactly one year ago, and I’m posting this review a year later on the dot, which is pretty cool timing. Here’s my Review. END_OF_DOCUMENT_TOKEN_TO_BE_REPLACED

END_OF_DOCUMENT_TOKEN_TO_BE_REPLACED

Wow, how am I already writing a post for #GardenWithJullia 2018!? Where does the time go!?

If you’ve been following along, you may know that 2017 didn’t quite get as much coverage as my first year of gardening in 2016. I’m hoping to change that for this upcoming year.

For Christmas I received an awesome set of seeds from my hubby, as well as some garden tools. This was just what I needed to dive back in! Since then I’ve made a spreadsheet and document with planting dates to help me get my head on straight and DO ALL THE THINGS!

Of course, excitable me decided I needed a whole new shelf and lights to devote to starting seeds this year. Luckily, logical (and much more budget conscientious) me has realized all I really need is some seed-starting trays. I found some on Amazon that have domes with them, and although I was thinking of getting a heating mat to really speed up the seed-starting fun, I think I’m going to break out my desk lamp instead. The trays have domes, so they should hold in the humidity and the temperatures fairly well. I may also wrap one level of the [existing] shelf in plastic to help hold in heat as well.

–If you remember my “makeshift greenhouse,” I have sense learned (by reading, not experience) that foil can cause the plants to burn. Thus my decision to try using plastic instead.–

As exciting as all of this is, I’m a little intimidated. There are tons of vegetables I’ve never eaten, much less grown, that I’m going to try growing this year. I’m nervous they won’t survive (some are going to do much better if I wait until the fall and plant them for the winter) and I’m worried about having places to put them all!

Other ideas for this year include looking into a greenhouse, or at least a cloche to extend the growing time when the weather cools off (and warms up in the spring, NEXT year).

If you’re curious as to what I’m considering purchasing, I’ve made an Amazon list. If you have any experience with any of these or better recommendations, I’d love to hear about it. One of the things I’m considering is the larger fabric raised beds as opposed to my buckets. I like the idea of being able to interplant, but the buckets give me a better support system for things like tomato cages. So I’m still undecided about that.

Within the next week or so I expect to begin starting seeds indoors, and I am excited!

Are you gardening this year? Just along for the ride? I’d love to hear from you!