I’d been seeing a little bit of The Reader on Twitter, and thought the cover was beautiful. When I found out Traci Chee is going to be at YAKFest, I thought it would be a good excuse to read this book 😉 I borrowed the kindle edition from my library on Overdrive. 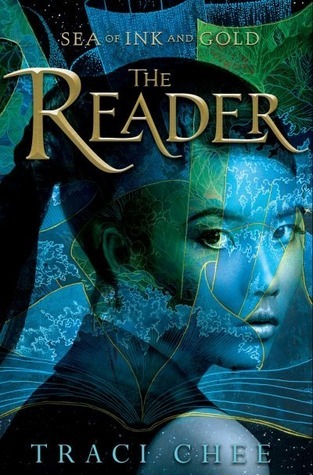 Sefia knows what it means to survive. After her father is brutally murdered, she flees into the wilderness with her aunt Nin, who teaches her to hunt, track, and steal. But when Nin is kidnapped, leaving Sefia completely alone, none of her survival skills can help her discover where Nin’s been taken, or if she’s even alive. The only clue to both her aunt’s disappearance and her father’s murder is the odd rectangular object her father left behind, an object she comes to realize is a book—a marvelous item unheard of in her otherwise illiterate society. With the help of this book, and the aid of a mysterious stranger with dark secrets of his own, Sefia sets out to rescue her aunt and find out what really happened the day her father was killed—and punish the people responsible. (Goodreads)

I’m so glad I read this. It pulled me in at page one (or the cover, let’s be honest) and didn’t let me go until I’d finished it.

I read this on my kindle app on my phone, and I think two things about that: I accidentally started the audible sample–I think this would be amazing to listen to on audiobook, and I think there are probably some interesting formatting things that would be even more appreciable in a physical book (I plan on finding out soon).

I see there are translated versions of the book, and I’m very curious as to how they are done. Because this was written in English and the words/letters of the Book are in English, I wonder if the words are different for the different languages. (They’d have to be, right? To make sense to those readers?)

I give The Reader 5 stars!

I loved the setting–the variance in the islands and the beautiful map to go along with the story! This is fantasy, it’s not set in our world, but I love that the characters are varied and diverse, too.

When it comes to the main character, Sefia, I liked her. I liked how she was always on the lookout and always thirsty to learn more from the book. I liked her weaknesses and good heart. I liked her anger and her pain. She was a fun character to read about.

There are several threads of story to follow, and the way they all intertwine have me in awe. One of my Goodreads updates was literally “I can almost not breathe.” Really, I think Traci Chee worked actual magic into her book.

I felt like there were parts of the oral tradition preserved in this book. I’m not talking about the way the characters passed down stories. The Reader contains certain rhythms and patterns that are reminiscent of what I know of the way such stories are told.

I really liked this book, but I’m having a hard time putting it into words, so hopefully you’ll try it for yourself.

Have you read (or plan to read) The Reader? What did you think?

2 thoughts on “Review – The Reader by Traci Chee”