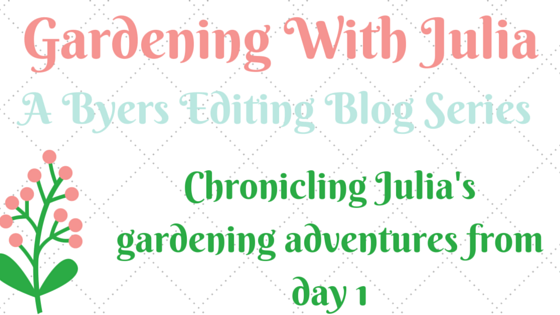 Hey there! I know I haven’t been as regular lately with my weekly updates, but sometimes life happens, ya know? Here are Update Videos 8 & 9, and a text recap below.

For the most part I have just been letting my plants grow. As far as watering goes, we’ve been having storms lately, and I’ve been letting nature do its job. If we go a few days without, I will give all the plants a good soaking. The lettuce and spinach plants, because of their sensitivity to heat, get watered every day.

Here’s an update by plant (info on transplanting, mulching, and planting further down):

The poblano pepper plant has really taken off, and has several good size fruits on it. It’d have several more if the dog would quit eating them when they get about two inches long. I’ve been keeping a closer eye on her but sometimes she is a sneaky little thing.

The pinot noir bell pepper plant I bought is flowering and trying to put out fruits, but I’m worried that it will not be able to support their growth because it is barely much taller than what I figure the peppers will be.

The jalepeño pepper plant doesn’t seem to be doing much, but it isn’t dying, either. I moved it again to a bigger bucket since it is still alive, but I have my doubts about how well it will do.

The gypsy pepper plants are no more. They never recovered from Sadie’s torture, and I decided to retire them and try to grow something else in their bucket and soil.

I have one last seedling to transplant, but it isn’t ready yet. It will be a carnival bell pepper, and since it is the only seedling to make it this far, I’m calling it a surprise pepper plant because I have no idea what color the fruit will be! It looks to be growing strong.

The zucchini and yellow squash that I transplanted into the buckets didn’t look to be doing too well for a while. Recently, though, they have put out new leaves and look to be doing a bit better. The surviving seedlings seem to be thriving as well, and I hope to find something to do with them other than just dispose of them.

The carrots are doing really well. They look nice and fluffy up top, and one night my patience lost a battle, and I pulled one up to see what it looked like. Despite the long, fluffy top it had, it wasn’t very big or flavorful. It did, however, give me affirmation that there are indeed carrots growing, and that they’ll be ready somewhat soon.

The onions are looking pretty strong too. I’ve been able to hold my patience on not pulling those out, although I know I could if I needed to use one. I’m really curious about what they’re going to be like when they are ready for harvest.

The spinach plants. They are still being eaten by something but they are still striving to put out new leaves. I have clipped/pulled off the mostly-eaten and yellowed leaves. I’m not sure if that’s helping anything or not. Something I did recently (more about it below) was add natural cedar mulch to the containers, and for the spinach I’m wondering if it has worked to deter some of the pests that were munching on it.

The lettuce is doing really well and remains one of my favorites so far. Because of the shallow container and sensitivity to heat of both the lettuce and the spinach, I have been making sure to water them at least once, sometimes twice a day. These are the only two plants receiving this treatment. Before I started doing this the leaves would get wilty and yellow (and some were even dried out and brown!), and I knew if I didn’t step up my watering game they would bolt soon. I’m hoping I can put that off long enough to get a harvest.

The cucumber plants are hard to judge. It doesn’t really look like they are doing much, although every now and then I catch a flower on one of them. They aren’t dead, though, so I think that’s a good sign.

The strawberry plant looks to be doing well. It has lots of nice green leaves and always has something new coming from the crown. When this growth is buds, I’ve been pinching them it to encourage root growth. I will probably continue this at least through June.

And finally, the tomato plants. They have been transplanted into their 5-gallon containers with deep-watering bottles. I don’t know if you remember, but I actually started the seeds for the tomatoes about 4 weeks late. Up until last week or so, I was really worried they wouldn’t pull through. Suddenly, though, it’s like they’ve turned a corner, and the seedlings began growing lots of leaves and looking stronger. I’m unbelievably relieved they have made it this far.

Transplanting the Tomatoes (and Cucumber)

I transplanted the tomato plants and cucumber plant in the same way I did the squash (video here). I drilled drainage holes in the bottom of my cleaned-up buckets. I lined the bottom with some landscaping fabric to keep the soil from flowing out of the holes. I gently added soil to the buckets until I was sure the fabric wouldn’t wind up bunched in the corner, then I poured more in (not quite as gently).

For the two tomato plants I had prepared half-gallon containers (I think they were juice this time–cleaned them up, of course) by poking holes in the bottom and sides to create a deep-watering system. I poured soil until it was where I wanted those containers to sit, then added them and continued adding the soil.

When the buckets were full of soil, save for a hole I made for the transplants, I shook the plants out (and try as I might to have been careful, I’m afraid these plants had a rougher ride than the squash plants did) and placed them in the hole. I made sure there was enough soil to encompass what had been in the seedling container, and for the tomatoes I added a little more.

Each plant got a cage, and then the tomatoes got a treatment of marigold seeds and basil seeds. I’ve heard that marigolds are a pest deterrent and that basil enhances the flavor of tomatoes. We shall see.

The cucumber plant that was transplanted is actually two plants, and I’ll choose the stronger looking one if they both look to be doing well once they get a little bigger. Although I bought a bush variety of cucumber, I still gave it a cage for a little extra support.

As I mentioned a little earlier, I invested in a bag of natural cedar mulch, and placed a layer in all of my containers to help slow the evaporation of water. It may also be helping out my spinach plants.

In addition to what I already have, I also planted some rosemary seeds in their own container, and a bucket of marigolds. The marigolds have already begun to sprout!!! These containers, as well as the tomato ones, since they have basil and marigold seeds, got a thinner layer of mulch than the others so the seeds could sprout up easily. I’ll add more mulch once the plants have their heads poking up.

With my carrots and onions near harvest, I’m trying to think of a way to plant more, but do it a little at a time every couple of weeks, so I have a more consistent harvest. Something to think about, at least.

Is there anything I haven’t covered about my garden that you’re curious about? I’d love to know so I can answer your questions.